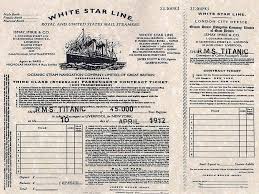 “The Titanic when she was built was meant to make history. It never occurred to anyone – not even to her builders or her owners that she was destined to make history so suddenly and so certainly”

On the evening of the 15 April 1912 the Belfast Evening Telegraph broke the news of the tragic sinking of the RMS Titanic. The loss of eleven parishioners from Addergoole, though not straight away known, was not just a human tragedy but it also brought to the fore fears that would be reminiscent of times past. The loss of eleven members of the group called the Addergoole Fourteen plunged many families  into economic uncertainty.

It is has proved thus far near impossible to ascertain exactly how each member of the Addergoole Fourteen, who lived in and around the Titanic Village of Lahardane, attained the finances to pay for the passage to the United States of America aboard the RMS Titanic.

Be it through remittances, a loan from the local trader/shopkeeper or the sale of the sole 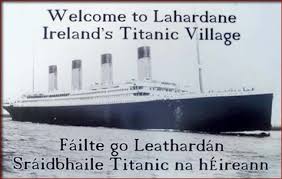 cow or pig, it has proved difficult to accurately verify how each member accrued the substantial passage fare of £7 15s to the United States aboard the RMS Titanic.

According to Timothy W. Guinnane the weekly earnings for an Irish agricultural labourer ‘were 10s. 9D. On average, ranging from 8s 9d in county Mayo, the comparable English average wage was 17s. 5d’.

This was only the case if one was participating in waged labour. Opportunities for waged labour were scarce if one was a woman one’s opportunities were steadily decreasing in the domestic service industry which was essentially the only waged labour market for Irish women. Many Irish women in rural areas were forced to work full time as unwaged housekeepers, tending to their family’s homestead and livestock and caring for their elderly dependents.

The ability to raise a large sum of money and invest it in the financing of a loved one’s emigration was to some extent a gamble as a return on the investment was never guaranteed despite a migrant’s best intentions.

Nonetheless there is evidence to suggest that many if not millions saw a return in some form or another in their investment as the consistent decrease in the islands population despite having a relatively high crude birth rate when compared to other European countries would point to such success.

The consistent emigration of predominantly those young indicated a ‘marked tendency for emigration from a local region to perpetuate itself, sons and daughters of each generation going out to join the members of the last’.

Remittances sent home by those who had previously emigrated ‘constituted an important component of the smallholders income’. In 1860 one million pounds was sent home to Ireland from the United States in the form of remittances. By 1900 a much smaller number of Irish emigrants were remitting up to $10 million dollars.

Remittances were used for various projects including paying the emigration of member of the family or relation, for a dowry, to pay the rent, the improve of the homestead, possibly the purchase of a cow or a pig and, importantly, to pay the debts accrued over the year at the local shop.

The loss of eleven of eleven of the Addergoole Fourteen was a severe blow to the maintenance of this chain migration, of the perpetual movement of those young and able. Those remittances that had been sent home to Ireland from their brothers, sisters, relatives and neighbours in the United States of America had come to naught. Time, patience, sacrifice and discipline were required in raising the required costs for a trans-Atlantic fare.