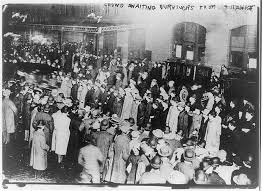 Waiting to see who survived

“We deplore the loss of so many of our boys and girls, and we sincerely trust that the days is at hand when they will find employment at home under a Home Rule Government, and not be compelled to risk the danger which confronts them by seeking employment in foreign lands”

The disastrous sinking of the RMS Titanic was a world event. The community in the Titanic Village of Lahardane, of the parish of Addergoole, and relatives of the Addergoole Fourteen faced an endless wait to receive a final confirmation of those who had survived and those who had perished.

The community in Addergoole and relatives of the Addergoole Fourteen were no different to other communities around the world; other communities in Sweden, Lebanon, Armenia, China, France, United States of America, Southampton, Belfast, Caltra in County Galway and Athlone in County Westmeath, to name but a few, waited anxiously for news that their loved ones had survived. It was a world event and thus it attracted world interest and worldwide sympathy.

“Representatives of practically all the foreign governments in London have called at the Foreign Office to express on behalf of their respective Chancelleries sympathy with the sufferers through the disaster, and grateful ackowledgements have been made by Sir Edward Grey”

The occasion deserved comment from the then Prime Minister of Great Britain and Ireland in the House of Commons:

‘Mr Asquith expressed yesterday in words of grace and

feeling what the whole civilized world is thinking. “I am afraid”, he said, “We must brace ourselves to confront the one of those terrible events the order of providence which baffle the most careful foresight, which appall the imagination, and make us realize the inadequacy of words to do justice to what we feel”‘

As families of the Addergoole Fourteen and the community of Addergoole in Mayo and families and communities throughout the island of Ireland began to mourn the loss of their loved ones messages of sympathy were offered by various Irish organisations:

‘Resolutions of sympathy with the bereaved relatives were passed [yesterday] by the Cork Corportation, the Rathmines Urban Council, the general Committee of Women’s Health Association [and the] Belfast Harbour Commissioners’

Similar messages of sympathy and messages of condolences to victims of the sinking of the RMS Titanic were offered by various Connaught associations. At a meeting of the Connaught Council of the Gaelic Athletic Association held at Ryan’s Hotel in Claremorris sympathy was offered to those families of the bereaved. The Ballina and Castlebar Board of Guardians expressed their sympathy with those who had lost loved ones aboard the RMS Titanic.

Significantly in a statement given by Mr John Walsh, a member of the Castlebar Board of Guardians and District Council, we witness a rare condemnation of emigration from Ireland printed in a Mayo newspaper published during this period:

“We the members of the Castlebar Board of Guardians and 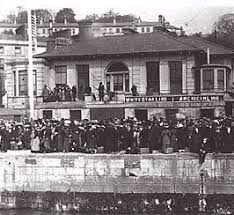 District Council deeply sympathise with the friends and relatives of those who lost their lives on the ill-fated ‘Titanic’, and we deplore the loss of so many of our boys and girls, and we sincerely thrust that the days is at hand when they will find employment at home under a Home Rule Government, and not be compelled to risk the danger which confronts them by seeking employment in foreign land”

A study of the Mayo newspapers during 1911 to 1912 period reveals very few comments relating to, or condemnation of, the consistent emigration of the local Mayo population as exemplified by the emigration of the Addergoole Fourteen. This was more reflective of the political and cultural atmosphere which was in stark contrast to condemnatory articles published in the three Mayo newspapers during the Irish War of Independence;

‘In the seventy years from 1841 to 1911 the number of homesteads in Ireland decreased by 468,960, which represents a greater destruction of homesteads than that occurred during the war in France, Belgium and Italy’

The outpouring of sympathy and compassion towards the families of those who had perished as a result of the sinking of the RMS Titanic can be exemplified by the establishment of various committees to gather and administer relief funds for families of the victims of the tragedy throughout Ireland and abroad.

Unfortunately as is true to human nature on occasions where there is an outpouring of compassion, empathy and charity there was also contrasting instances of greed, dishonesty and duplicity:

‘A woman named Darcy, who states she is native of Ballaghadereen, has been arrested and remanded in Sligo jail, one of the charged against her being that she was making a tour of the West posing as a survivor of the wreck of the Titanic, her husband having been drowned on the occasion. By this means she obtained considerable sums of money, whereas she was merely a fraud”