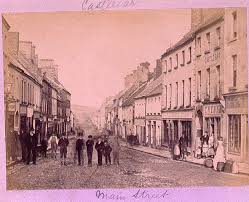 It is apparent that the two agents who sold the Addergoole Fourteen their tickets for trans-Atlantic passage aboard the RMS Titanic inadvertently became their advocates in lobbying for relief funds from the official fund established by the Lord Mayor of London. The lengths to which both shipping agents, Mr Thomas Durcan and Mrs Walsh of Castlebar, were admirable. The Addergoole Fourteen had booked their tickets with the two shipping agents some time before:

‘The following are the passengers booked by Mr. Thomas 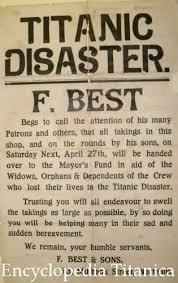 Durcan, Castlebar, and the presumption is that all have been lost, still there is hope that some of the females may have been rescued; – Norah Fleming, Patrick Canavan, Bridget Donohoe, James Flynn, Mary Mahon, John Bourke, Catherine Bourke, Mary Bourke, Kate McDermott, Mary Canavan. All the above are from the Lahardane district, as are the following, booked by Mrs Walsh, Linenhall Street, Castelbar: – Annie McGowan, Catherine McGowan, Delia Mahon, Annie Kate Kelly. In the list of survivors published on Thursday, the name of Annie McGowan appeared’

‘We understand that Mr Thomas Durcan…has forwarded particulars in connection with the ten emigrants from Lahardane district he booked for the ill-fated Titanic and all of whom were lost. He has made an appeal to the Lord Mayor of London on behalf of the parents and dependents of the survivors praying that they be remembered when the fund raised by him for the purpose of being allocated. The Countess of Aberdeen has also had the case of these poor people placed before her by Mr. Durcan; and he has done similarly with the White Star Company, which has promised to do everything possible in the matter’

In the same article the actions of Mrs Walsh was also noted:

‘Mrs Walsh…has forwarded to the company the Lord Mayor of London, the Countess of Aberdeen and the Board of Trade, detailed particulars in connection with the passengers she booked by the Titanic’

There is little or no evidence as to what came of the two agents lobbying. A further article will describe the efforts by others to alleviate the distress of those who were left economically improvised as a result of the sinking of the RMS Titanic.