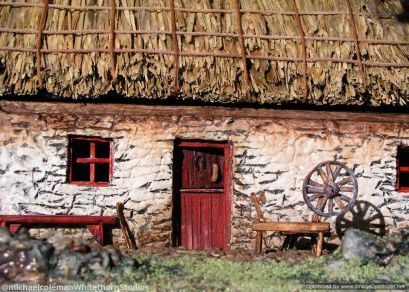 In September 2011 during an Addergoole Titanic Society meeting, David Donoghue, nephew of RMS Titanic victim Bridget Donohue, suggested that the Mayo Titanic Cultural Week, scheduled for 8 – 15 April,  needed a model of an Irish Cottage so that people could gain some perspective of how people lived in 1912 Ireland. David turned to Michael Coleman of Whitethorn Studios, and said; “Michael, Can you build me a cottage? Michael obliged. The following are his own words.

“I set the goal before me to construct a 1/24 scale model as an example of a typical West of Ireland Cottage from the era of emigration when the Addergoole Fourteen left Lahardaun & Addergoole Parish, County Mayo, departing from Scott’s Quay, Queenstown (Cobh), County Cork and boarding the R.M.S. Titanic, 12 April 1912″

“Next, I conducted research at the Country Life Museum, Castlebar, taking many reference photos. Over the following three months, November, December and January, I took my time building the model”.

“Everything is hand-made and from found objects. For example, I had a bit of ash that I carefully carved to a barrel shape using my pocket knife. I engraved small lines down the side, made rings out of leather scraps, then washed on paint wiping it off here and there until I had a barrel. It wasn’t complete until I hollowed out a third of the inside”.

“The end of January I had a house full of furniture including a cradle that rocks, spinning wheel that ‘spins’, wheelbarrow with a ‘wheeling wheel’, and doors that open. Using a wood bead I reshaped it as a kettle with lid and paperclip handle,

all painted black. The butterchurn is a wood bead+cereal box board+matchstick, the griddle a 2 cent coin”.

“The hearth required special attention for detail as it was considered to be the centre of family life. It was here at the

fireside that stories were told, decisions made, prayers recited, children nurtured, songs played out to generations, and silence and meditation brought solace to the heavy hearted”.

The model is 1/24 scale model by Michael Coleman, Whitethorn Studio, Carrowkeel, Lahardaun. The model will be on display in the village of Lahardane throughout the Mayo Titanic Culture Week on 8 – 15 April 1912.

Michael’s eye to details, dedication, patience and skill is illustrated by how detailed he has created the exterior of the cottage and the interior.

The following pictures will illustrate how well the cottage model has turned out. It looks like David Donoghue asked the right man to recreate a replica similar to the home from which his auntie, Bridget Donohue, had left days before the Titanic sank on the night 14 April 1912. 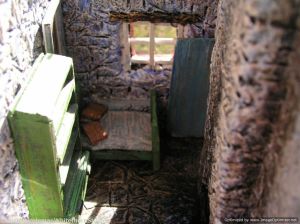 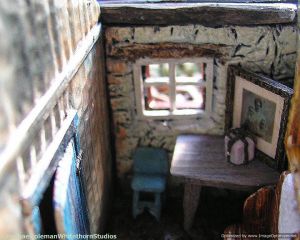 4 thoughts on “Michael, Can you build me a Cottage?”